Rafi has a degree in Practical Engineering and over 15 years of experience in residential construction. He began his career as a tradesman and familiarized himself with all aspects of construction. Rafi brings with him a thorough understanding of the building process from foundations through to the waterproofing around the windows. He has spent the better part of his career in the field supervising, managing, and building luxury homes in the Jerusalem and Gush Etzion area. As an emigrant from America, he not only speaks his clients’ language, but he also understands their concerns, culture and expectations and the meaning of good customer service. 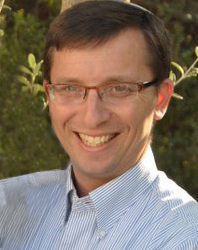 Serves as the liason betweeen the client and the contractor

Our project manager, Rafi Epstein, was critical to the entire experience of building the house. Not only is Rafi a consummate professional with detailed knowledge of all required to build a house, but he is also an absolute pleasure to deal with. Many people try to scare you in advance of such an undertaking with the difficulty of dealing with an “Israeli Kablan”. With Rafi as our project manager, every day was a pleasure. He managed the teams professionally and on time, was always available and attentive, and found creative solutions to any problems that arose.

As you can see from the above – I highly recommend working with Rafi Epstein.

Rafi was responsible for the management of a very significant renovation of our home. Rafi has the unique ability to provide “American style” customer service while at the same time knowing how to operate and build in Israel, with all of the unique challenges that this represents. Rafi has a very strong attention to detail and has high expectations for the final product. I unconditionally recommend working with Rafi.

I have been a repeat client of Rafi Epstein’s for many years now. There is not one floor of my house that has not been thought about and worked on by Rafi’s golden hands.

Rafi Epstein coverted my basement into a full service apartment complete with its own kitchen, laundry, electrical and water system.

He was a constant consultant on my attic project where we built a retractable roof and added a bathroom.

Rafi was available and ready to problem solve a major plumbing blockage (on two different occasions!) With his own expertise and strength, he dug up outside underground pipes, opened sewers, found and fixed our problem.

Even with small jobs, we received Rafi’s full attention. I remember when the bowl of my sink was literally starting to sink. It was dropping from its place. I called Rafi to ask him what I should do or who I should call for such a thing. He came right over, looked at it, thought of a creative way to support the bowl with a block of wood from underneath, and rather quickly once again, Rafi solved my problem. That was years ago. The sink still remains in place.

Most recently, we converted a bedroom into a doctor’s office. Rafi was the contractor. He found a reasonably priced company to cut a window opening into a door opening. He found a reasonably priced aluminum worker to build the new door. He made suggestions on how better to soundproof the wall in between the waiting area and the doctors office, and he himself took care of the finishes. What impressed me most though was that Rafi showed up when the cutting company came to cut or when the aluminum worker came to install the door. He didn’t just show up. He stayed and watched them work to make sure they did everything the way he wanted.

He never made me feel like he had to be anywhere else. When Rafi is on a job, he is 100% there. He is constantly thinking about how to do things better. He will think outside of the box if need be and he teaches you little do-it-yourself tricks along the way.

Clearly, I cannot say enough about Rafi Epstein and how much confidence I have in him to run and manage any building project.

I am a huge Rafi Epstein fan.

Rafi managed the construction of our house from beginning to end — from signing the agreement, through the post-construction visits after a heavy rain to make sure there were no leaks. (There weren’t.) He is straightforward, honest, reliable and hard-working.

Consistently, Rafi went the extra mile to consider the many details that we so appreciate now that we are in the house. With his extensive hands-on experience in so many projects over the years, his careful planning at early stages ensured a smooth process, with few surprises. Drawing both on his knowledge and his concern for the project, Rafi regularly guided us on the little things (“you should put additional switches near the beds”) as well as the bigger issues (lengthy discussions about the heating system, solar vs. gas vs. electric).

It speaks to Rafi’s commitment that I have many memories of Rafi working in or around our house in less than ideal conditions — until 2 in the morning the week before we moved in, or outside in the cold and rain at 10 at night, moving a gas line. It is a pleasure to work with someone who takes so much personal pride in his work. We are happy to recommend Rafi to anyone considering a construction project, and confident that you will be equally pleased with the results.